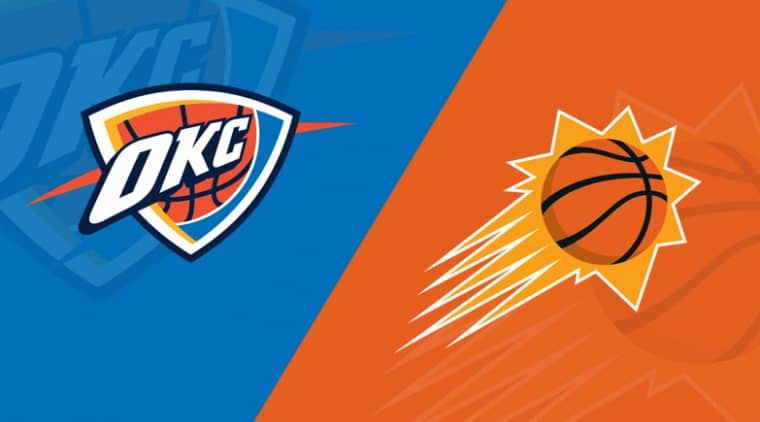 There hasn’t been much to celebrate for the Oklahoma City Thunder lately as they’ve won only 1 of their last 7 games overall and just 1 of their last 10 at home. However, one interesting stat that pops out in head-to-head meetings is OKC’s home record against Phoenix. They’ve beaten the Suns in 16 of their last 17 games at the Paycom Center which is very unusual considering how good the Suns have been the last couple of years.

OKC fans will be looking forward to seeing their best player Shai Gilgeous Alexander out there who returns after a ankle injury, however they’ll have to manage without the guy who filled in for him as Lu Dort is expected to miss tonight’s game following a shoulder injury. The Thunder are 7-3 ATS in the last 10 meetings, having covered the spread in 15 of 28 games at home this season, they aren’t without a chance in tonight’s game.

Life without Chris Paul begins for the Phoenix Suns tonight as their point guard and leading assists per game man starts to rehab his broken thumb which should keep him out of action for 6-8 weeks. It’ll be interesting to see how the Suns cope with the loss of such an important figure, in the 2 games played last season without Paul they are 2-0, but that’s not much of a sample size to take it seriously. The player that was expected to take over the point guard duties Cam Payne is also out with a wrist injury, so it’ll be up to the likes of Landry Shamet, Elfrid Payton and Aaron Holiday to step up.

Phoenix is currently on a 11-1 SU run over their last 12 road games, but with all the absences at the point guard position they could be in a bit of trouble here. In their last 11 games against the Thunder they’ve gone just 3-8 ATS and entering tonight’s game they are 9.5 point favorites which won’t be easy to cover.

Even though the Suns won both meetings earlier this season fairly easily by 12 and 18 points, I think we’ll see a different story tonight. The Thunder are playing at home where they have a pretty good record against the Suns, plus CP3 is out and Devin Booker didn’t rest much over the weekend. This is the perfect opportunity for OKC to pull off the upset here. Back the home team and the extra points.

I’m expecting a lower scoring game here simply because the Suns offense will suffer without their point guard Paul. Before the all-star break they scored 130 or more points in 2 of their last 4 games, but I doubt they’ll put up that much against an OKC side playing really slow this season. The Thunder rank just 16th in pace of play averaging only 100.3 possessions per game, plus they rank 10th in defensive efficiency with teams scoring just 107 points per 100 possessions against them.

Looking at their games against Western Conference teams we can notice a trend of games finishing under more often than not, with that happening in 9 of their last 13 such games. The under has also cashed in 8 of their last 11 games against Pacific Division opponents which is really good news for out bet here. Phoenix games against Western Conference teams have also been on the lower end scoring wise with 6 of the last 9 finishing under the total. They rank 3rd in defensive rating, with their offense suffering here they’ll turn to the other side of the floor in order to get the win, so we could be in for a lower scoring game. Let’s back the under.